Make No Doubt About It, Joe Wants Your Guns.

Following his huge win on Super Tuesday, former Vice President Joe Biden announced earlier this week that Beto O'Rourke “will be the one who leads” his gun-control effort.  You might remember Robert Francis' promise of “Hell yes, we're going to take your AR-15," yes, that Beto O'Rourke.  Beto, a former Texas congressman and Democratic presidential candidate himself, famously promised in a debate in September that he would actually confiscate firearms. They are “weapons of war, designed to kill people efficiently on a battlefield,” he proclaimed.

O'Rourke vowed to “buy back every single assault weapon” but said that he would have no problem using force if people didn't voluntarily agree to selling their guns.  But last year, many Democrats worried that O'Rourke's aggressive position would alienate moderate voters and give credence to conservative assertions that Democrats really do want to take away people's guns. Some prominent Democrats felt it necessary to distance themselves from those comments. “I don't know of any other Democrat who agrees with Beto O'Rourke,” Minority Leader Chuck Schumer (D., N.Y.) once said. Others have previously blamed O'Rourke for creating distrust about gun-control advocates' motives. A CNN headline last fall posed the question, “Is Beto O'Rourke single-handedly dooming a gun control bill?” 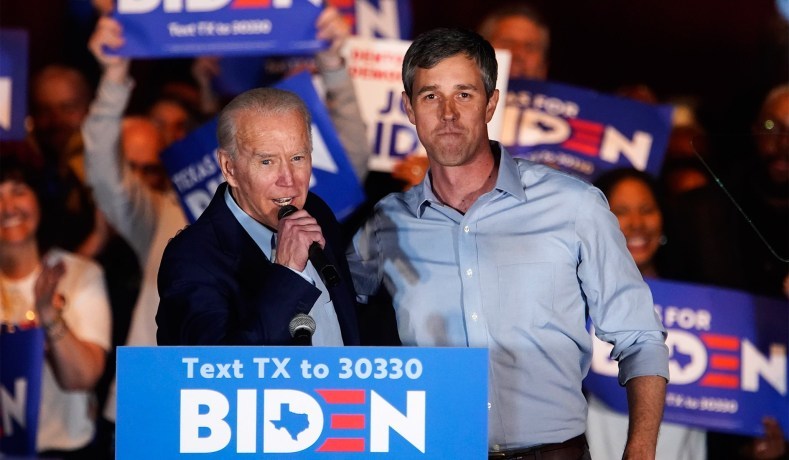 After O'Rourke's comments, President Donald Trump tweeted that O'Rourke had “convinced many that Dems just want to take your guns away.” Biden has now locked himself into that position.

In every campaign rally, Trump declares his unwavering support for the Second Amendment. It appears to be one of his most popular lines.  But the recent injection of Beto back into Biden's campaign (in a quid pro quo for his endorsement) has once again brought back to the forefront some of the most aggressive anti-Second Amendment statement ever uttered by an American politician.  While the Democratic Party has been conspiring for years to disarm the American people, O'Rourke is the first candidate ever to come right out and say it.  O'Rourke doesn't even try the "reasonable gun control" approach, instead he is bold and brash about using government to forcibly seize citizens' firearms.

Virginia has been the looking glass by which we can all see what the Democrats have in store for the nation at large when it comes to our Second Amendment rights. The state, much like our state, has recently enacted many new measures, including Red Flag laws, gun-lock requirements, a one-handgun-a-month purchase limit, and costly background checks on the private transfer of guns. Virginia has even given its local governments the green light to pass their own, more extreme gun-control laws. The newly elected Democratic legislature of Virginia engaged in an all out attack on their citizens' Second Amendment Rights.

If more progressive state legislatures follow suit, only the courts will be able to rein in these state gun-control laws. President Trump's federal judicial appointments could make a significant difference, but they have only just reached an approximate political balance. Republicans hold a nominal 5-to-4 majority on the Supreme Court, but Chief Justice Roberts has proven to be quite a moderate on the bench.

The Supreme Court hears fewer than one out of every thousand cases decided by the circuit courts, and those courts are equally divided. Currently, Democratic judges hold the majority in circuit courts in 24 states, plus the District of Columbia, while 26 states have Republican majorities. But in order to truly tip the balance in the Federal Circuit Courts, another term from the current President is needed.

Biden was Barack Obama's point person in his push for gun control. That wasn't by accident. In choosing Beto O'Rourke, a person who openly brags about not owning a gun, Biden has made the election debate over whether people should even be able to own guns. In just a few short years, the Democratic Party has gone from wanting to discuss "reasonable gun control measures" to wanting to discuss whether or not the Second Amendment should even exist at all.  Make no mistake about it, your right to defend yourself is as stake in November.