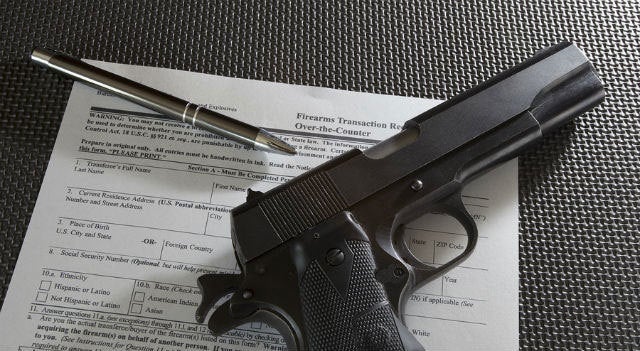 Originally Published by Amy Swearer at the Heritage Foundation.

Very few people disagree with the idea that certain individuals should not be allowed to legally access firearms.  Federal law reflects this general consensus by barring felons and those with histories of serious mental health problems from legally purchasing or possessing firearms unless their civil rights have been restored.  But certain members of Congress have recently taken this general consensus as an opportunity to introduce H.R. 8, a poorly constructed bill that would impose significant burdens on law-abiding citizens by mandating “universal background checks.” With very limited exceptions, the bill would require citizens to pay to obtain services from a for-profit business called a federal firearms licensee prior to transferring any firearm to another person, for any reason.

1. It Doesn't Address the Problem.

This bill does nothing to attack the actual sources of illegal firearm possession.

Studies routinely show that most would-be criminals do not obtain their firearms through legitimate legal sources. When would-be criminals do go through licensed dealers or third-parties who they know are going to utilize a background check, they do so precisely because they do not have a disqualifying history and will pass that background check.  In other words, the people who are willing to use a firearm to commit crimes aren't very keen on following laws in order to procure the firearm. They already avoid background checks, and will continue to avoid background checks in largely the same manner—through illegal channels.

It's hardly surprising that study after study has concluded that universal background checks have no effect on crime or suicide rates.

2. It Would Create a Monopoly.

Under H.R. 8, private citizens seeking to exercise their constitutional right to keep and bear arms would be forced by the government to first pay for background check services from a for-profit federal firearms licensee.  The bill would also prohibit the federal government from setting a maximum fee that a licensee can charge for processing a background check, meaning the licensee could charge whatever it pleases for a service the government requires.

Further, because private firearm transfers are a primary source of competition for federal firearm licensees, the licensees would have plenty of incentives to make these transfers less financially practicable by charging large fees. Imagine if independent journalists were mandated by law to first pay a licensed newspaper company to check for libel prior to publishing any content, and you see the problem. The worst part is that the creation of this de facto monopoly is unnecessary. Congress could modify the existing background check framework to allow non-licensees access to the national background check system, either over the phone or via the internet.

3. Familial Exceptions Would be Irrationally Limited.

Currently, H.R. 8 would exempt transfers between certain immediate family members from the background check requirement, but only if the transfer is a “bona fide gift.” This means that the transfer must be permanent and not in exchange for anything of value.  Therefore, under H.R. 8, a father could permanently and freely gift a $2,500 hunting rifle to his son. But if the son reimbursed his father for even a few dollars of that very expensive firearm without first trekking to a federal firearm licensee and paying for a background check, both the father and son will have committed very serious felonies. This makes absolutely no sense.

Further, the gift exemption does not apply to gifts between certain types of family members who are similarly situated to those it does exempt, such as in-laws, first cousins, step-parents, or even between non-parental legal guardians and their former charges.

4. It Makes No Exceptions for Common Low-Risk Transfers.

H.R. 8 would mandate background checks even for temporary transfers when the original firearm owner is not present for the duration of the time that someone else possesses the firearm.  As Second Amendment scholar Dave Kopel recently noted, there are numerous scenarios in which law-abiding gun owners make temporary transfers in low-risk situations, and it is impractical or impossible for them to remain “present” with the transferee.  Sometimes, these temporary transfers are for the purpose of keeping guns out of dangerous hands in the first place. It is not uncommon for a person facing deployment or going on a long vacation to store their firearms with friends or neighbors so that the guns don't remain unguarded in empty homes.

Under H.R. 8, however, this temporary transfer would require both parties to traipse down to the nearest federal firearm licensee, pay significant fees, and wait for the background check to clear. On top of that, they would have to repeat the process in order to return the firearm to its owner.  This impracticality could incentivize gun owners to leave their guns in unoccupied homes for extended periods of time, rather than slog through the processes mandated by H.R. 8. Perhaps worse, it's a serious felony to simply ignore the law on the basis of practicing good firearm safety.

5. It Would Endanger Law-Abiding Citizens.

Background checks can take up to three days to be completed, and they rely on the availability of the national background check system, which can sometimes go out of service. Even worse, some states mandate that licensees must wait for significant periods of time—anywhere from three to 10 days—before completing the transfer and handing over the firearm to its new owner.

Even private transfers would become subject to those same waiting periods, leaving almost no options for those who may be in danger.  It's not just that Democrats would never tolerate that type of burden for any other constitutional right—though they certainly wouldn't. It's that for some people, such as victims of domestic violence or stalking, those wasted days could mean the difference between life and death.

6. It Would Treat Good-Faith Mistakes as Serious Felonies.

Because this bill treats common low-risk and temporary transfers as felonies in the absence of a background check, it is extremely likely that otherwise law-abiding individuals would unknowingly fail to conduct a background check and become felons.

H.R. 8 shows no mercy for these good-faith mistakes, and contains no “mens rea” (or “guilty mind”) requirement.  Someone who lets a friend borrow a rifle for a hunting trip without a background check has committed a crime, regardless of whether he intended to break the law or had any reason to believe his actions were criminal.

In the same way, under this bill, if you lend a shotgun to a friend currently being stalked by a former spouse without first making time for a background check, you would be subject to the exact same criminal penalties as if you had knowingly bought a firearm for a dangerous criminal.

7. It Would Place Unreasonable Burdens on Law-Abiding Young Adults.

H.R. 8 would force these private parties to go through licensees, who legally cannot transfer the handgun to 18 to 20-year-olds, regardless of whether the transfer would otherwise have been legal between the private parties under state and federal law.  By mandating that all handgun transfers now take place through federal firearm licensees except for those between family members, the federal government would force law-abiding young adults to rely on exempted transfers from family members to access the most commonly-owned type of firearm.

8. It Provides No Exemption for Concealed Carry Permits.

As a group, concealed carry permit holders are among the most law-abiding citizens in the nation. They are, in fact, statistically much less likely to break the law than are law enforcement officers.  In order to obtain a concealed carry permit, a person has to pass the same background check required under H.R. 8. If the permit holder receives a disqualifying criminal or mental health conviction, he or she must forfeit the permit.

This means that a valid concealed carry permit, on its face, is proof that a person recently passed a background check and has done nothing since that point that would cause him or her to fail it now. Yet H.R. 8 makes no exemptions to the background check requirement for those who can already prove they may lawfully possess firearms.

We don't make anyone safer by imposing significant and unnecessary burdens on the exercise of fundamental constitutional rights, especially when the burdens don't address the ways in which criminals abuse those rights.  Instead of passing this tortured bill, Congress should look at ways to shore up the enforcement of existing laws, which do address the underlying realities of criminal firearm activity.