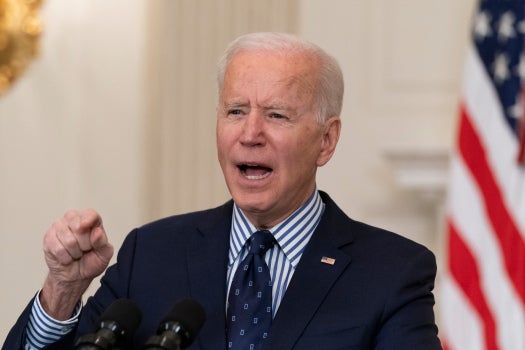 Originally Published by Amy Swearer at the Daily Signal.

Unfortunately, instead of seeking support for laws addressing the real underlying factors of gun violence, the President is pushing politically divisive measures that would turn the right to keep and bear arms on its head without meaningfully making the nation any safer.

Biden’s message called on Congress to ban so-called “assault weapons” and “high-capacity magazines,” to mandate background checks on all gun sales, and to “eliminate immunity for gun manufacturers who knowingly put weapons of war on our streets.”  He promised that his administration “will take action to end our epidemic of gun violence and make our schools and communities safer.”

There are obvious constitutional problems with banning the future sale or possession of the nation's most popular semi-automatic rifles.  As the Supreme Court explained in D.C. v. Heller, McDonald v. City of Chicago, and Caetano v. Massachusetts, the Second Amendment protects all arms that are commonly used by law-abiding citizens for lawful purposes.

There's a reason that law enforcement officers—who by definition serve a defensive, responsive role, rather than an offensive, war-making role—overwhelmingly choose to arm themselves with these types of guns when confronting criminal threats in a civilian context.  There's nothing “unusually dangerous” about the AR-15. In fact, the defining features of “assault weapons” are not functional properties such as caliber, muzzle velocity, or rate of fire. Instead, the defining features are cosmetic in nature, making the firearm safer, easier, and more comfortable to handle, especially for less-experienced shooters.

The fact that the Second Amendment protects these types of commonly owned firearms should be the end of the discussion. But beyond such a measure's doubtful constitutionality, it would also constitute bad policy.  Semi-automatic rifles are, by far, the type of firearm least likely to be used to perpetuate criminal violence, and account for only about 3% of gun-related homicides every year.  Even assuming that every criminal turned in his or her “assault weapon” and never obtained a different type of firearm to commit the same crimes in the future, there would likely be no noticeable drop in gun-related crime as a result of this policy.

That is, in fact, exactly what the official study of the original federal assault weapons ban found in 2004.

Any ban on so-called high-capacity magazines would fail constitutional muster and policy considerations for largely the same reasons as a ban on “assault weapons.”  There is nothing “unusually dangerous” about factory-standard magazines capable of holding more than 10 rounds, which are regularly employed by police departments around the nation. Moreover, there are likely hundreds of millions of these magazines in circulation already—meaning, they are incredibly common for lawful uses.

Even in mass public shootings, the majority of shooters already bring more than one firearm, and the average time frame between the start of the shooting and an armed response is such that a shooter having to spend several seconds reloading is effectively meaningless.  This is, in fact, what the Virginia Tech shooting commission concluded regarding the use of such magazines in the tragic 2009 mass shooting there.

Recall, too, that the majority of gun deaths every year are attributable to suicides, where magazine capacity is irrelevant.  Perhaps most important is the reality that, as with law enforcement officers, American civilians do sometimes face threats where they are outnumbered and outgunned, and where having to reload after 10 rounds truly puts them at a handicap against criminals.

In fact, just last month, a resident of Summerville, South Carolina, was reported as firing at least 13 rounds in a shootout with two suspected car thieves. Such stories are far from uncommon.

3.  Background Checks on All Gun Sales

Let's be clear about what existing law already demands.  Any person or entity who is “engaged in the business of dealing firearms” must obtain a federal firearms license and conduct background checks before completing a gun sale or transfer, regardless of whether that sale or transfer takes place at a gun show, in a brick-and-mortar store, or over the internet.  The only time federal law does not require a background check is when the sale or transfer is conducted by a person who is not “in the business” of selling guns, and both parties are residents of the same state. Part of the reason for that is that, currently, only federal firearms licensees have access to the National Instant Criminal Background Check System.

It's not inherently a bad thing to require that all private commercial sales be required to go through the background check process. There are, however, two important things to keep in mind.  First, even if 100% successful, this is a low-reward endeavor. Private commercial sales simply are not a major way in which would-be criminals acquire firearms.  Second, most calls for “universal background checks” inevitably involve the imposition of significant burdens on low-risk and temporary transfers of firearms between law-abiding citizens.

In short, if these background checks are limited only to publicly advertised private sales [effectively, sales between strangers], and combined with exemptions for concealed-carry permit holders, they could be a relatively reasonable low-risk, low-reward policy.

But it's not at all clear that Biden would veto a bill that stretched far beyond those limits. Indeed, he gives every indication that he would likely sign such a bill.

It's important first to understand what the law currently is with respect to gun manufacturers and immunity.

Under the Protection of Lawful Commerce in Arms Act, gun manufacturers (as well as sellers and distributors) are still liable for selling defective products; for failing to abide by numerous federal regulations regarding safety, sales, and records; for false advertising; and for a wide array of other widely recognized tort claims.  The law only protects them from lawsuits claiming that they are liable whenever a third party criminally misuses a firearm that the company manufactured and sold in compliance with the law.

Congress granted this type of immunity precisely because gun control advocates routinely sought to barrage the gun industry with these lawsuits, in hopes of miring businesses selling a lawful product in frivolous, but expensive, litigation.  When gun control advocates call for this type of immunity to be lifted, their real aim isn't promoting public safety, but using the court system to choke out a lawful industry when legislation can't otherwise do so.

Conclusion: Nothing Proposed Makes Us Safer

In short, none of President Biden's proposals would make Americans safer.  If the President is serious about keeping Americans safe from gun-related violence, there are plenty of steps he could urge Congress or state governments to take that promise to be far more effective and far less constitutionally questionable.

Violence and mental health are very complicated problems that deserve comprehensive, holistic responses addressing underlying issues.  For example, states and the federal government could remove barriers to gun ownership for law-abiding citizens, allowing more responsible Americans to adequately defend themselves in more places.  Additionally, we could invest in the nation’s mental health infrastructure and engage in targeted, time-limited interventions for specific individuals who are nearing mental health crises. That includes training communities and local officials to take reported threats of violence or signs of deteriorating mental health seriously.  States in particular should utilize proven anti-gang violence programs—programs like the ones Virginia Democrats recently declined to fund.

It's unfortunate that the Biden administration won't pursue these far more meaningful measures.