Gifting a Gun This Christmas 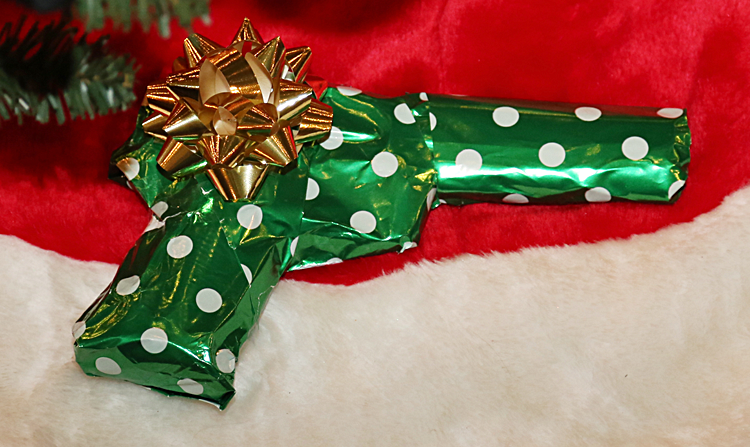 With gift-buying season upon us, it's natural for gun owners who enjoy target shooting, hunting, collecting or just plain plinking to want to share their enjoyment of firearms with others. What better way to do that than to gift a firearm to a family member, close friend or relative?

The first thing to remember if you're thinking about giving someone a gun is that … it's a gun! You already know that ownership of a firearm brings with it some serious legal and ethical obligations that other consumer products don't. So let's look at some questions you may have about giving a firearm as a gift.

Buying a Gun as a Gift

The first question you have to ask is whether the intended recipient can legally own the firearm where he or she lives. With more than 20,000 different gun laws on the books, even the kinds of firearms that law-abiding citizens can own vary from place to place; for example, juveniles (under age 18), generally speaking, are precluded by law from possessing a handgun. Check out the Bureau of Alcohol, Tobacco, Firearms and Explosives (ATF) website for an overview of local laws and, whatever you do, don't forget that you can never under any circumstances transfer a firearm to someone you know — or have reasonable cause to believe — legally can't own one. That's a federal felony, so be careful.

There's no federal law that prohibits a gift of a firearm to a relative or friend who lives in your home state. Abramski v. United States, a recent Supreme Court decision involving a “straw purchase” of a firearm did not change the law regarding firearms as gifts. The following states (California, Colorado, Connecticut, Delaware, New York, Oregon, Rhode Island, Washington State) and the District of Columbia require you to transfer a firearm through a local firearms retailer so an instant background check will be performed to make sure the recipient is not legally prohibited from owning the gun. Maryland and Pennsylvania require a background check for private party transfer of a handgun. There are exceptions, so it's important to carefully check the law of your state or ask your local firearms retailer.

Commonly referred to as the “gun show loophole,” in 2014, Washington became the first state to enact a law requiring background checks on private sales.  The law requires private buyers and sellers to conduct a firearms transaction through a federally licensed firearm dealer (FFL).  The FFL must process the transaction as if the dealer were selling the firearm from his or her own inventory and comply with all federal and state laws regulating firearms dealers, such as performing the required background check on the purchaser.  To read the entire law click here and here.

A sale or transfer of a firearm that is in violation of this law is a gross misdemeanor upon the first offense.  If an individual has previously been convicted of an illegal transfer, they will be charged with Class C felony for all subsequent offenses.  Each a firearm is considered a violation regardless of the number of “transactions” that took place.

There are some exceptions to this law.  Some transfers between non-licensed sellers and buyers are exempt from the background check requirement including:

The FFL may not transfer the firearm to the purchaser until either the purchaser clears the background check or ten business days have elapsed from the date the FFL requested the background check, whichever occurs first.   For transfers of handguns to individuals without valid Washington driver's licenses or state identification card or who have not been a resident of the state for the previous consecutive 90 days, the FFL may not deliver the handgun until the transferee passes a background check or 60 days have elapsed since the date of the request, whichever occurs first.

When a Washington resident buys a long gun out-of-state, or sells a long gun to an out-of-state resident, the buyer and seller must follow the procedures of the background checks law.   FFLs may not sell or deliver a handgun to a resident of another state.

Who Can You Transfer a Firearm To?

It is critical that if you are selling or transferring a firearm to another individual that they are legally permitted to possess that weapon.  State law forbids many individuals from possessing firearms including:

Federal law also prohibits firearm possession by any individual who:

Penalties for Illegal Sales or Transfers.

Violating this law comes with serious consequences.  A first offense, constitutes a gross misdemeanor, punishable by up to 1 year in jail and a $5,000 fine.  Any subsequent offense, is charged as a Class C felony, punishable by up to 5 years in prison and a $10,000 fine.  Moreover, each firearm sold or transferred in violation of this law constitutes a separate offense.  The law specifically states:

Notwithstanding the penalty provisions in this chapter, any person knowingly violating RCW 9.41.113 is guilty of a gross misdemeanor punishable under chapter 9A.20 RCW. If a person previously has been found guilty under this section, then the person is guilty of a class C felony punishable under chapter 9A.20 RCW for each subsequent knowing violation of RCW 9.41.113. A person is guilty of a separate offense for each and every gun sold or transferred without complying with the background check requirements of RCW 9.41.113. It is an affirmative defense to any prosecution brought under this section that the sale or transfer satisfied one of the exceptions in RCW 9.41.113(4).

The ATF recommends that if you want to give someone a new firearm, rather than going to a gun store, buying it on your own and giving it to, say, your father, consider instead purchasing a gift certificate from that retailer and giving it to Dad as his present. That way he'll get the exact gun he wants, and there's no question about who is “the actual buyer of the firearm,” which is a question any purchaser must certify on the Federal Form 4473 at the time of purchase.

You can only ship a handgun by common carrier (but not U.S. mail) and a long gun by U.S. mail or common carrier to a federally licensed retailer, but not to a non-licensed individual in another state. With all carriers, federal law requires you to declare that your package contains an unloaded firearm. To be safe, always consult your carrier in advance about its regulations for shipping firearms.

Giving a Gun as a Gift

What if you want to give “Old Betsy,” your favorite old deer rifle, to your son or daughter as a college graduation gift? Again, in most states, there's no law that says you can't, but some states require even inter-family transfers to go through a licensed retailer. Even under Washington's strict transfer laws, transfers between immediate family members is permissible without a background check.  Remember, you can never transfer a firearm directly to another person who is a resident of a different state. In that case, you must transfer the firearm through a licensed retailer in the state where the person receiving the gift resides. Using a gift certificate from a firearms retailer near where the recipient lives might be a good solution. Pre-1898 antique firearms are generally exempt from the retailer requirement. Be safe and check with your retailer or local law enforcement before you hand over your prized possession.

It's often an emotional moment when a treasured family heirloom is passed down to the next generation. These moments are part of what our cherished enjoyment of firearms is all about and represent that unique bond that sportsmen have with their fellow enthusiasts.

So enjoy the holidays and do it right!