Rep. Lauren Boebert Does Not Need a Virtual Background for her Zoom Meetings 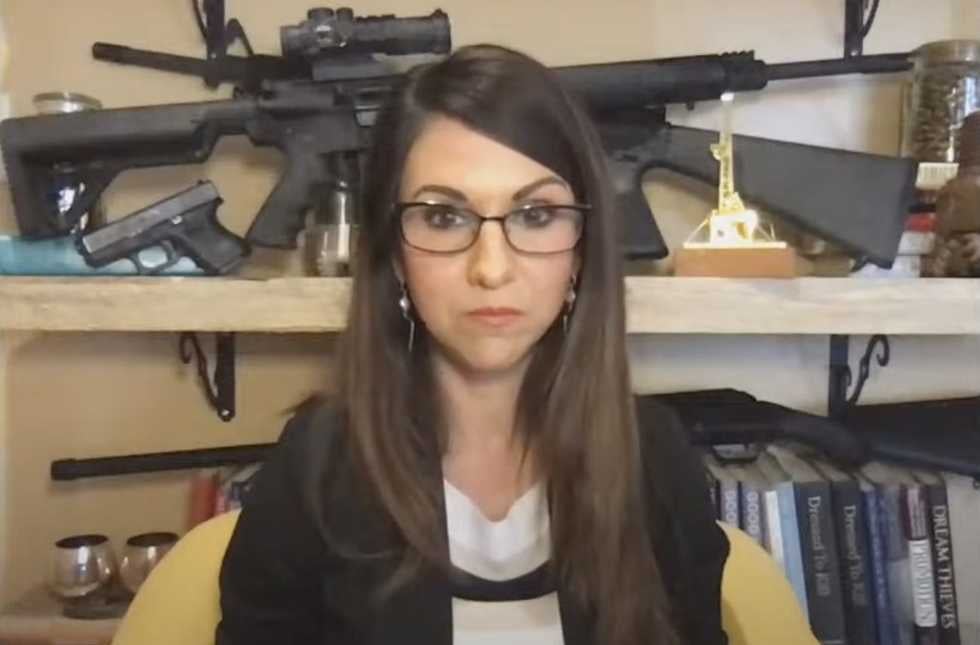 At a virtual meeting on Thursday against a backdrop of at least four guns, Rep. Lauren Boebert of Colorado slammed a House committee's proposed rule to bar people from carrying firearms in its hearing room at the Capitol.

"This rule is absurd and discriminative," Boebert said in front of a bookshelf stacked with firearms during a conference call with the House Natural Resources Committee. "This is a blatant violation of our constitutional rights."

The freshman Republican called on the committee's chair, Democratic Rep. Raúl Grijalva of Arizona, to issue her a "personal security detail" if the committee went ahead with the measure.

"I would like to request at this time personal security detail that the chairman pays for himself for every time I'm stepping into the committee room," Boebert said. "If this is passed, the chairman is trying to take responsibility for my personal safety while stripping away my Second Amendment rights."

Per a 1967 regulation, Congress members are allowed to keep guns in their offices and transport them around the Capitol complex. There are some exceptions, however, including on the House and Senate floors. In recent weeks, Republican lawmakers, including Boebert, have touted the regulation and opposed what they perceive as restrictions to it.

The House Natural Resources Committee's members met Thursday to organize its panel for the 117th Congress, which included a debate on a rule to prohibit carrying firearms inside its hearing room. The rule was ultimately approved by a voice vote.

"As far as we're concerned, we're not doing anything new here," a Democratic spokesperson for the committee told Insider. "We're restating existing policy."

Democratic Rep. Jared Huffman of California defended the rule Thursday and criticized Boebert's perspective.  "Here's the reality: If somebody wants to have a shrine to their gun fetish as a Zoom backdrop in their private life, they can do that," he said during the meeting. "But this is our hearing room. And at some point, we will get past the COVID epidemic, and we'll all start showing up in person. And our safety and our ability to conduct business civilly without feeling threatened is a relevant consideration, unfortunately."

Boebert later brushed off criticism of the guns in her video background after screenshots of them were posted online.

"Who says this is storage? These are ready for use," Boebert said in response to a tweet mocking the firearm placement as "unsafe gun storage."  Fellow Rep. Jason Crow of Colorado, an Army veteran, slammed Boebert's display as a "political stunt."

"I never stacked guns on a bookshelf when at war, let alone on a zoom in my living room," Crow tweeted.

Boebert, a gun-rights advocate, gained national attention last month when she suggested that she'd carry a Glock with her around Washington, DC, and to Congress. Open carry is illegal in the nation's capital, and gun owners must register their firearms with the Metropolitan Police Department and obtain a permit should they choose to carry them concealed. The police department at the time said it would reach out to Boebert.

During Thursday's meeting, Boebert also raised concerns with the new metal detectors installed outside the House chamber in light of the Capitol siege on January 6. She previously reportedly refused to abide by the safety protocol.

Boebert represents Colorado's 3rd Congressional District and ran her 2020 campaign on a pro-gun platform. She owns a restaurant in the state called Shooters Grill, where the staff is encouraged to openly carry firearms.