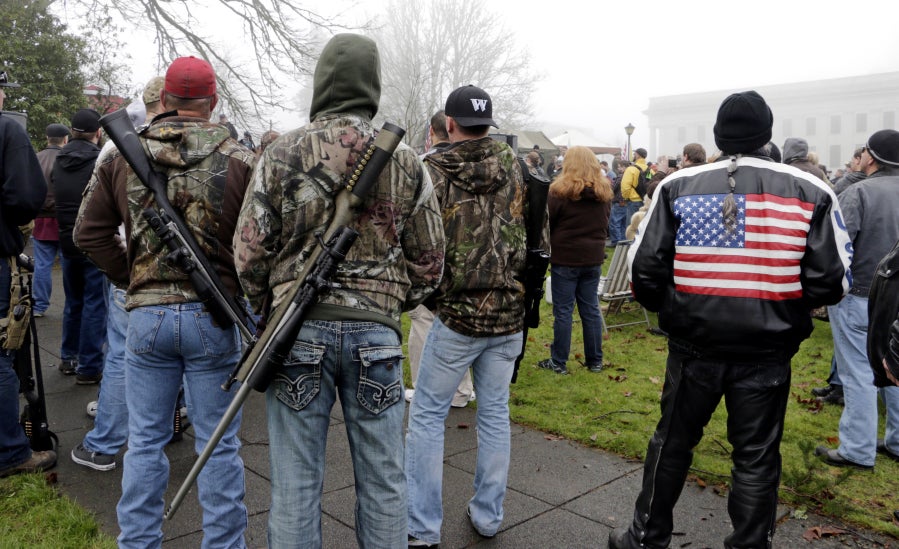 After an emotional debate that highlighted and lamented America's sharp political divisions, the Washington Senate has voted to ban the open carry of firearms and other weapons, not just at the state Capitol campus, but at permitted demonstrations in public spaces across the state.

The passage of Senate Bill 5038 last Thursday afternoon came after months of intense protests around the state over the killing of people of color by law enforcement, as well as by demonstrators supportive of former President Donald Trump in the wake of his election defeat.

After a debate of more than an hour, the bill passed the Democratic-controlled chamber on a party-line vote, 28-20. It now heads to the House for consideration.

“We know that neither the First nor the Second Amendment is absolute, we know that there have been restrictions, reasonable restrictions placed on each of them,” said Sen. Patty Kuderer, D-Bellevue and sponsor of the bill. “This is just another one.”

One after one, Republicans rose to object, many arguing that the measure tramples on the Second Amendment and could put them in danger.

Sen. Lynda Wilson, R-Vancouver, cited the example of a woman who wants to carry a firearm for self-defense but can't get a concealed pistol permit due to a backlog.

“So you have to open carry in order to be able to go someplace,” said Wilson. If that woman were going to a downtown business in Vancouver, Wilson added, she could find herself “within a short distance of a demonstration that just started.”

Over the past year, as anger ratcheted up across the political spectrum, protesters and counter-protesters turned out heavily armed and at events and gatherings in Seattle, Spokane, Vancouver, Olympia and other places.

Armed demonstrators have sometimes left some people feeling fearful. In other cases, demonstrations have turned violent.  However, a huge majority of the violence seen in the last year, under the guise of social justice, was not committed by lawful and responsible gun owners.

In Olympia, firearms have long been present at the Capitol for political symbolism, with gun-rights supporters rallying peacefully by the hundreds, sometimes by the thousands.

But that dynamic changed in December, when political clashes at or near the Capitol campus led to shots being fired during three different instances as demonstrators rallied in support of or against Trump. The shootings injured at least one person.

“These are not what we have considered normal times and we need to take action,” said Sen. Sam Hunt, a Democrat from Olympia who voted for the bill. “Schools have gun-free zones and … we can do the same thing in very limited instances, which this bill does.”

Kuderer's bill bans the open carry of guns or other weapons at demonstrations at public spaces that have gotten permits from local, state or federal agencies, according to a legislative analysis of the bill.

The amended version of the bill as it passed defines a demonstration as a gathering of 15 or more people at an event in a public place where a permit has been issued by a government agency, or where local officials have designated as permitted.

The legislation provides an exemption for anyone controlling or possessing a firearm or weapon on private property that is owned or leased by that person.

If it ultimately becomes law, a violation would be a gross misdemeanor. Several GOP lawmakers, such as Sen. Curtis King, R-Yakima, noted protests in Seattle last year led to the city briefly allowing an autonomous zone to sprout up. Officials shut that zone down after two homicides occurred within.

King noted that such protests aren't given permits by officials.

In another emotional speech, Sen. Steve Hobbs, D-Lake Stevens, talked about how his district was split pretty evenly on both sides of the issue.  But Hobbs, who is also a colonel in the Washington Army National Guard and who served in Iraq and Kosovo, described his time overseas as one reason he ultimately voted yes.  “When I was in Kosovo facing an angry Serbian mob, we nearly shot at these people,” said Hobbs. “Because it's scary … but we were disciplined.”  “Because I guarantee if you're not disciplined enough in getting rocks thrown at you, when you have a firearm,” Hobbs added later, “you're going to use that firearm.”

And while we certainly respect the experience of Sen. Hobbs, the bottom line is lawful and responsible gun owners, even those open carrying at a protest or demonstration, DO NOT commit crimes.  In the current pandemic, despite hundreds of thousands of new gun owners in Washington State, access to obtaining a CPL has been significantly hindered by health regulations.  For most new gun owners, they are left with two choices:  leave the gun at home or open carry it.  Couple that with the fact that anytime a protest or demonstration is underway which actually supports the United States, or law enforcement, it is often times met with violent opposition from Antifa.  This organization serves no legitimate political purpose, has not legitimate message and exists solely to inflict violence and damage upon those that they do not agree with.  This legislation is meant to suppress free speech by forcing a segment of the population to take their own lives in their hands simply because they want to express their political views.