What Everyone Needs to Know About CheaperThanDirt.com 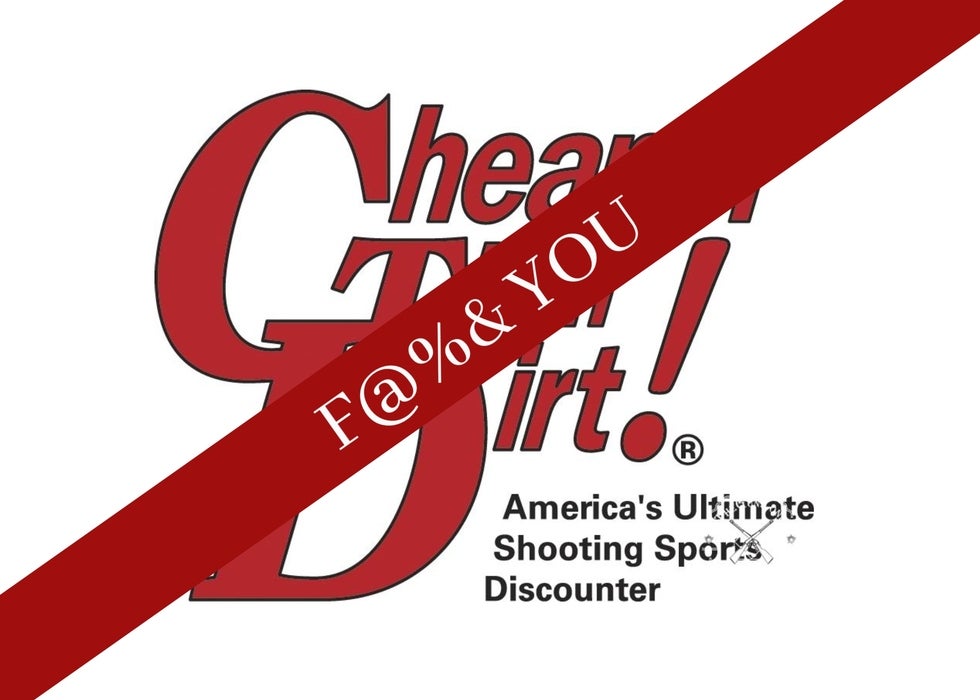 We are certainly living in unprecedented times.  The Coronavirus has changed our entire way of life, business has come to a screeching halt, and personal interaction is a thing of the past.  That has many Americans scared.  Scared that both guns sales and ammunition sales are now exceeding the pace set immediately after the Sandy Hook tragedy.  The firearms industry, which was struggling mightily since the election of President Trump, has found a new life.  Sales of all firearms and all calibers of ammunition are at an all time high.  Some of the more reliable online retailers for ammunition have nearly run out:

Capitalizing on the fear of Americans, Cheaper Than Dirt this week took the concept of "supply and demand" and tried to gouge lawful and responsible gun owners nationwide in a manner which can only be described in contract law as "unconscionable."  Fortunately, the Second Amendment community is a close knit one which carefully monitors itself.  Within hours, several videos were hitting YouTube alerting consumers to the insane price gouging at the expense of gun owners everywhere.  At one time, Cheaper Than Dirt was selling Remington 9mm brass cased target ammo, 115 grain, for $979!!!  That's nearly $1.00 per round for ammo that normally sells for about .$0.16 per round.

What makes matters worse, this is not the first time that Cheaper Than Dirt has capitalized on the fear of Americans to take advantage of gun owners.  Let us all remember that following the Sandy Hook tragedy, Cheaper Than Dirt notoriously jacked prices on ammo and magazines to levels that had many crying foul then.  Some even questioned whether or not Cheaper Than Dirt supported the Second Amendment.

The gun community is now demanding a boycott of Cheaper Than Dirt.  Some have even suggested that the Government should investigate further, which is odd considering how many Second Amendment supporters view the role of government in private affairs, but we digress.  But the outcry continues for gun owners to never do business with them again.  It's true, we live in a free market society where the law of supply and demand rules.  Yes, Cheaper Than Dirt, you do have the right to raise your prices to whatever you think the market will support.  But the consumer has the right to know what you do, why you do it, and who you do it to.  For the second time in a less than a decade, your company has exploited the fears of hard working, law abiding, gun owning Americans.  You have shown your true colors to the American consumer.  You have shown your lack of deference to our Second Amendment rights and a lack of respect for the American gun owner.  You have the right to do business as you wish, but we have the right to never do business with you again.  I hope that every lawful and responsible gun owner in America joins us at Washington Gun Law in declaring that you will never do business with us again.

Great article by Mr. Kirk and I agree, price gouging is the “Democrats” way of stifling our 2nd amendment rights. So fk you Cheaper than dirt!

I no longer will support Cheaper Than Dirt

I get their promo emails. They’re completely insane. 223 for > $1/round. Someone’s paying it, though.

thank you for your post we need to know .

3/24/2021…. as of today they are still price gouging and selling and crappy Anderson stripped ar lower for 299.99 and its literally 45 dollars everywhere else.

I used to look forward to shopping on cheaper than dirt, as they often had really great prices on military surplus stuff like wool-knit caps, etc. I don’t know if I will never do business with them again, but I won’t for at least a year or two given their patent dishonesty.

I have never been a supporter of “Cheaper than Dirt”, I saw their true colors many years ago when I first looked into their websitem, and their colors aren’t in the least red, white and blue, but rather green. I compared their prices to elsewhere and they have always been by far much higher; hence the reason why I never made a single purchase from them, Ammo will naturally correct itself at some point, perhaps not to where it was, but it will be more affordable and available than it is now; and one thing about the firearms community is that we don’t forget, and we will and should remember all those who price gouged and took advantage of everyone in a time of crisis. So I say to all fellow gun owners: remember those that monopolized the situation like Cheaper than Dirt, individuals on Gun Broker.com and so many others like them, and never, and I mean never do business with them again, regardless whether they hypocritically drop their prices again merely to survive. We don’t need businesses like them around. Honestly, we live in a very good country and don’t really need the ammo that bad, we just simply want it because we can’t have it. Things will eventually stabilize. We are a resilient community. We do not need to be desperate and foolish and go along with this, but rather patient. This will stabilize it’s own, it has to if the gun and ammo industry want to stay in business for the long term. Making it unaffordable is not the path to their success. Shop at places such as Walmart, Big 5 Sporting Goods and others such as them who kept their ammo prices reasonably fair when available during the shortage. We owe our loyalty to those who were loyal to us.

Marco, thank you for those well-thought and measured comments. You are correct, the Second Amendment Community does not forget easily.