Gallup Claims Americans Want Stricter Gun Laws. But Do They?

According to a recent Gallup Poll, fifty-six percent of Americans say they are dissatisfied with U.S. gun laws and policies, marking the ninth consecutive year of majority-level dissatisfaction since the 2012 mass shooting at Sandy Hook Elementary School in Newtown, Connecticut. At the same time, 42% of U.S. adults expressed satisfaction with current U.S. gun laws. 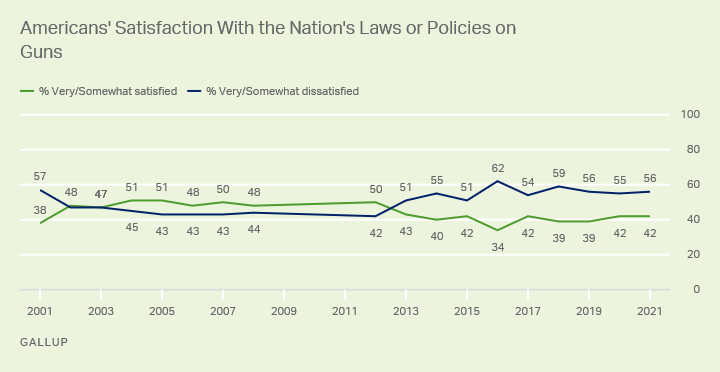 Gallup asked Americans about their satisfaction with specific issues, including the nation's gun laws and policies, each January since 2001, except for 2009-2011. In 2001, 38% of the public was satisfied with U.S. gun laws. Satisfaction rose in subsequent surveys, hovering near 50% from 2002 through 2012, but since then, it has generally held near 40%. The highest dissatisfaction, 62%, was recorded one month after the December 2015 mass shooting in San Bernardino, California.

The latest findings are from a Jan. 4-15 Gallup poll that preceded President Joe Biden's Feb. 14 call for "commonsense gun law reforms" on the third anniversary of the Parkland, Florida, school shooting. His proposed changes include background checks on all gun sales, bans on assault weapons and high-capacity magazines, and more accountability for gun manufacturers.

Biden's desired stricter gun measures are very similar to those that Congress failed to pass after the Newtown mass shooting, when Biden was serving as Barack Obama's vice president. That vote in Congress laid bare Republican lawmakers' unwillingness to bend on the Second Amendment protections afforded citizens from the Constitution. Since then, Republicans and Republican-leaning independents have generally become mildly more likely to express satisfaction with U.S. gun laws, while Democrats and Democratic-leaning independents have become less likely to be satisfied. Two exceptions to this occurred in 2014 and 2016, when Republicans' satisfaction fell amid calls for stricter gun laws.

Republicans and Republican-leaning independents are now more than three times as likely as Democrats and Democratic-leaning independents to say they are satisfied with the nation's gun laws and policy, 69% vs. 22%. This 47-percentage-point gap in satisfaction is in line with those since 2018. Before that, the average party gap was 22 points. 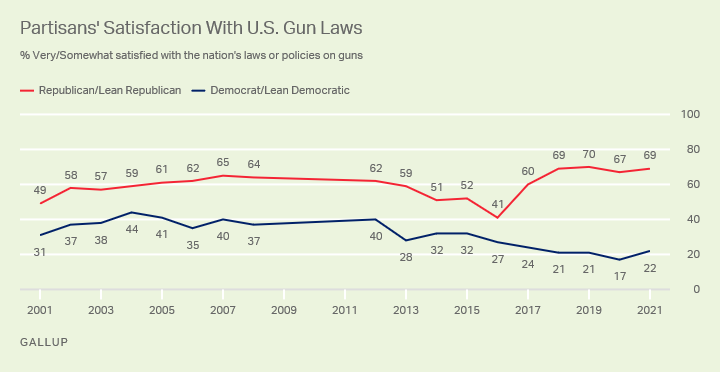 As a follow-up question, Gallup asked only of those who said they were dissatisfied with current gun laws, explored what respondents would like to see happen to those laws. Given that dissatisfaction with gun laws is primarily seen among Democrats, it follows that people who are dissatisfied prefer stricter rather than more lenient laws. 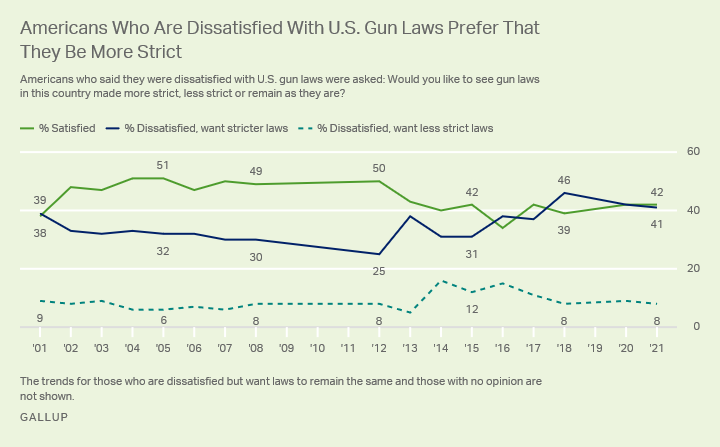 While 69% of Republicans say they are satisfied with U.S. gun laws, 68% of Democrats are dissatisfied and want them to be stricter.

While Gallup claims that Americans continue to express more dissatisfaction than satisfaction with U.S. gun laws, and partisans remain sharply divided in their views, the argument that our country wants tougher gun laws is not supported by the data. Moreover, the public's calls for more gun control have tended to be in reaction to mass shootings, as have lawmakers' attempts to pass stricter gun laws.

After the nation's deadliest mass shooting, in Las Vegas in 2017, the Trump administration banned bump stocks, which make semi-automatic rifles able to fire like machine guns. Trump also indicated that he was open to stricter gun laws after the Parkland, Florida, shooting, but he never took action on that. Likewise, Trump said in 2019 that he would look into changing background checks in the wake of mass shootings in El Paso, Texas, and Dayton, Ohio, but ultimately he declined to push for any changes.

The latest proposal from Biden, however, comes when the U.S. has not seen a mass shooting in recent months. Biden has worked to make the nation's gun laws and policies stricter since he was a U.S. senator and helped pass the Brady bill and the now-expired assault weapons ban. However, he faces an uphill battle in trying to get a bipartisan deal now, given the nation's current political divide and the availability of the legislative filibuster.